Another month, another friend going traveling! My envy increases significantly every time I write one of these but there is always the consolation prize of blog posts.

We got annoyingly and awkwardly limited on our time in Portugal because they wouldn’t let us board the plane without proof of onward travel, which we did not have at the time, so we had to panic and buy bus tickets to Spain on our phones in the check-in area. Not ideal. So we basically just forced our itinerary around that and the fact that we were meeting a friend in Sevilla, which meant about 9 days total in the country. Numbers are approximate guesses.

Things we did:
– Castelo de Sao Jorge has peacocks and a really excellent view of the city.
– We definitely stopped in some churches but clearly none of them made a significant enough impression on me for me to remember them that well. I’m not really a church tourist in general though.
– There’s a very pretty lookout over the city that I’ll try to remember the name of that also has little food stalls so you can buy cured meat and very potent cheese and eat it on one of the benches.
– The Gulbenkian museum is one of my grandma’s arty friend’s favorite museums. It’s very small (so nicely manageable) but an interesting kind of eccentric collection.
– I think most of our time in Lisbon was spent getting over jet lag and just wandering around. It is great city for aimless wandering assuming you have been working out and can do 80% of your wandering uphill.
– It was sardine festival season while we were there so they were having small festival street parties on the corners and grilling sardines straight out of the net, which was fun. They do literally nothing to the sardines, you have to gut and debone them yourself, which is an adventure.
Did not do:
– Torre de Belem, I don’t remember why, we probably just didn’t want to wait in line. I slightly regret this.

– We took the train here from Lisbon just for a day, but if we had more time, I would’ve stayed overnight. It’s so cute and charming.
– We did the Moorish Castle and the Quinta da Regaleira. We were too cheap to take the bus up to the castle and decided to hike up instead, which is long and hot. Consider the bus. The castle mostly involves hiking around the ruin of the old castle/fort and dramatically standing on top of walls with an excellent view of the surrounding countryside.
– I cannot overstate how delighted I was by the Quinta da Regaleira. It’s completely bonkers. The owner built it as his application to join the Freemasons. It has underground grottos with tunnels! A Greek statuary corridor! A kangaroo gargoyle! An “initiatic well!” So many gardens full of cats! Gooo.
– Lots of places offer shots of cherry liqueur in chocolate cups. Worth trying.
– The Piriquita bakery has been there forever and is very good.
Did not do:
– The Palacio de Pena, though I heard excellent things, we just ran out of time. There are three other (I think) mansions you can tour also if you’re there longer, they sell package ticket deals.

Things we did:
– Drink a lot of port. Like a lot. I didn’t even think I liked port, but apparently either I was wrong or it’s just way better here. We did the tour at Graham’s because David’s family said it was their favorite, it has a really nice tasting and if you pay for the slight upgrade you get to do the tasting in their fancy private library room like some kind of railroad baron.
– We didn’t do a tasting/tour at Sandeman but their patio bar is open later than the tasting rooms (which we learned our first day there after we wanted to go tasting and everything was closed) and is very pleasant.
– The Kopke tasting people didn’t have my favorite port but will give you a plate of chocolate with your tasting, which is always exciting.
– The Livreria Lello is allegedly the inspiration for the bookstore in Diagon Alley in Harry Potter which means it is full of tourist nerds and now they charge you for entry. Are you a nerd who is delighted by funky wizard-y staircases? Go. If you are not, other people are sometimes unimpressed.
– Just hanging out down by the river at night is so pretty. Though this is also one of the few places I almost got pickpocketed so don’t get too drunkenly distracted by shiny lights.
Did not do but I kind of wish we had:
– Actually see any port vineyards, you have to take a boat up the river to get to the actual vineyards and we decided it was too expensive.
Food:
– Most of the restaurants right along the edge of the river are pretty touristy and not great. We went to one called Terreiro that was amazing and had a cockle rice dish that I still dream about.
– Wine Quay bar is also great for when you get tired of port and just want to sit and drink vinho verde and eat delicious tomato bread.
– Multiple people told us to go to Taberna Dos Mercadores but we never got a reservation, but you should go on my behalf and report back.
– This was maybe one of the nicest budget hotel places we found, the Moov hotel is a renovated old movie theater and very nice for the cost. 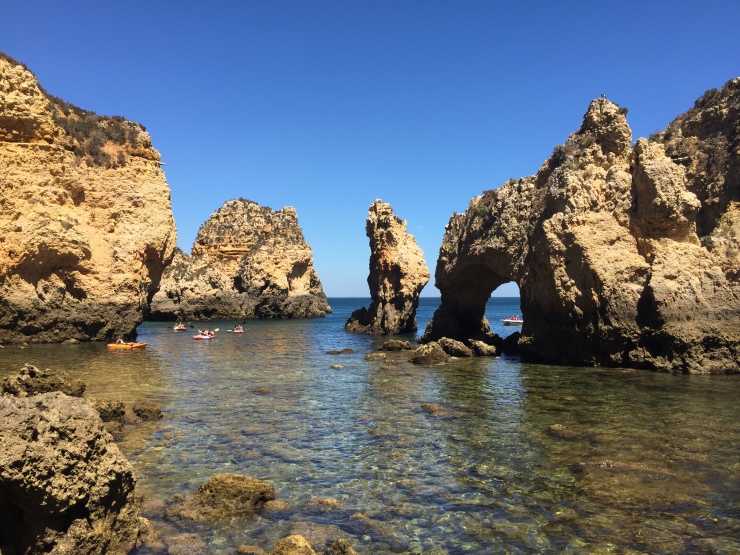 – I would not say you need to go to Lagos specifically, it is cute but it’s also mostly full of very sunburnt pasty British people on holiday. You should definitely go somewhere in the Algarve region though, the beaches are very lovely and blue.
– I can’t even make a list of what we did here because it was pretty much just “lie on this beach. Then lie on this other beach.”
– Go eat every tuna al algarve though, it’s tuna with usually some variation of tomato/caper/onion/olive oil and is delicious.

Places we did not go but thought about

– Coimbra, though we seriously considered it and just didn’t have time. David’s siblings went and said it was a nice little university town though kind of quiet while they were there.
– The bone chapel in Evora even though I really wanted to.
– The Azores, unless you count stumbling off the plane from Boston at some disorienting hour of the morning and sitting in airport customs quarantine during a layover, but I hear good things.

– The trains are so efficient. Sometimes they are a little old, but they were great about showing up on time and smooth transfers. We never drove anywhere, though David’s family did that if you want me to ask him about it.
– I ate a lot of pastel de nata and I regret none of it.
– I also ate basically either a bolo de arroz or the little cakes that look kind of like scalloped-edge UFOs every day for breakfast. Other than the tuna I never found any Portuguese entrees that I really loved (it’s not a super veg-friendly country), but the bakeries are great.
– As is the vinho verde. Just drink all of that.
– The language barrier is slightly tricky sometimes but you can pretty much guess close enough based on the Spanish similarities.